Pro-surfer Bianca Buitendag and pro-skier Lena Stoffel have a passion for surfing and traveling. For Roxy’s and Swox’ newest short film “Ku Khangela” the two took off to surf the south east of South Africa. Between Jeffreys Bay and Durban lays the land of Xhosa, formally known as Transkei. Home of Nelson Mandela and perfect right hand point breaks. In the interview with Lena Stoffel you will find out how South Africa’s marine life made a big impression on her and about the day Bianca saw her first snow.

Lena, where are you guys at in the video geographically?

I flew into George and we went to Bianca’s place in her hometown Victoria Bay, that is on the south east coast of South Africa. From there we took the car east, which is towards Durban, to an area formally known as Transkei, which means beyond the river Kei. It is rural, simple, and very beautiful. The Xhosa people are living off their land. It’s pure Africa, so that was very special to me.

How did you meet Bianca? Can you tell us about your friendship?

I am a professional skier for Roxy, but 12 years ago I also developed a passion for surfing. With Roxy as a sponsor that works out perfectly. I get to spend quite some time on the west coast of France, because that is where the Roxy headquarters in Europe are located. Bianca spends a lot of time there during the European WQS events. This is where we met surfing. Right away we got along really well. Bianca is a very humble and amazing person.

We hung out a lot in France and then she came to visit me in Austria. She wanted to come to Innsbruck to go snowboarding. She told me they have a little resort they go to in South Africa, which has snow making, but she had never seen real snow. Therefore took her up to the glacier and she got to see real snow and the big mountains in the Alps. That was a very memorable moment! Ever since she wanted me to come see her in South Africa. It took five years, but we finally made it happen.

Let’s talk about the trip itself. How was it like?

We drove there by car and rented a house of a friend of a friend of Bianca right off the water. We stayed there for about a week. The drive was an adventure. Once we got into the Transkei area, we got off the main road and then it took us about three hours for 50 kilometres on a tiny, bumpy road, it got dark, but we finally made it. We went there in November, which is the start of the summer in South Africa. So during the day it was nice and warm, really comfortable actually, but every now and then it was a bit cloudy and chilly. The water temperatures are around 23 degree Celsius.

We had to bring all our supplies for the week. The little town had one little shop, but you could only get the very, very basic stuff. Elvis was our saviour! He was our local guide, who took care of us and fished for us every day. But every day the other locals came by the house with their catch, too, and basically took care of us, it was super nice! All the kids hung out and played soccer with us.

Bianca is a travel pro, she knows to bring certain things on trips and how to say thank you to locals around the world. So she brought the soccer ball and a ukulele. The local kids beat us in soccer and played the ukulele, it was like a big family. It felt very natural and I felt like part of the community. 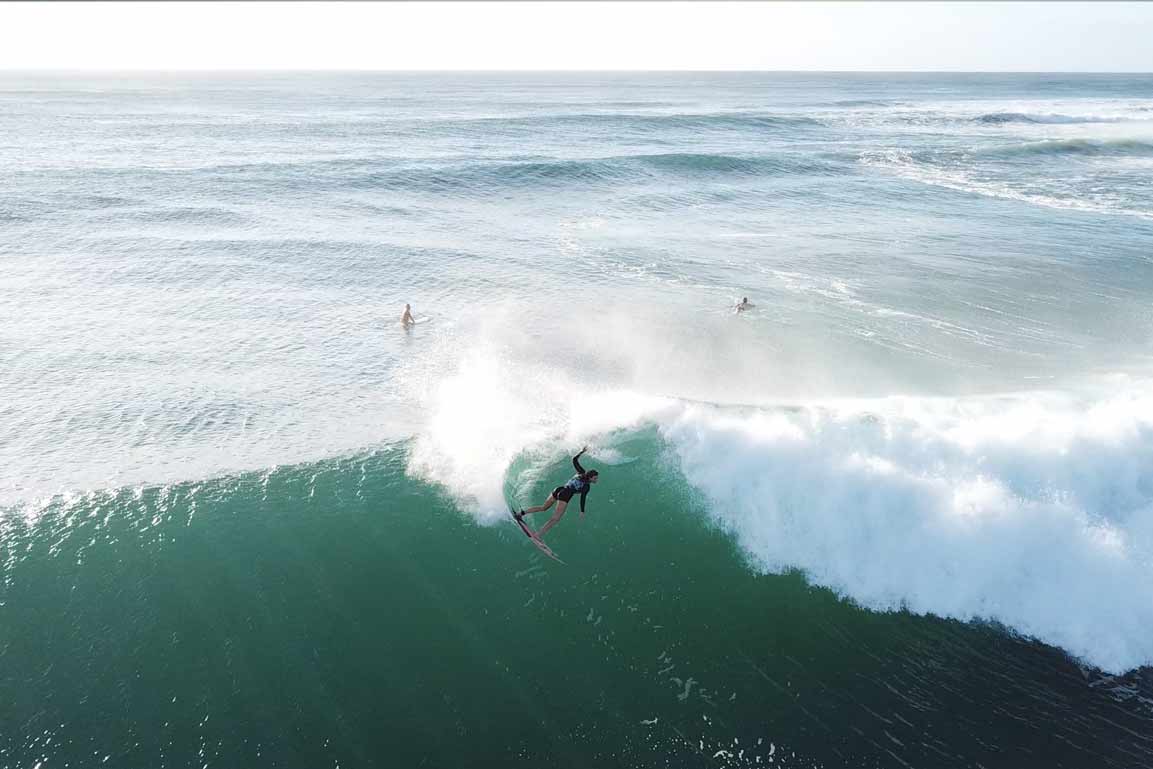 How do you pronounce the title of the short film?

“Ku Khangela” is pronounced “Kou Kann-Gail-a”, it’s the Xhosa language. It’s one of the African languages with the click sound. It’s really different.

Because traveling around is tough due to street conditions, we stayed at the one spot during the week. So it was a very chilled week. We usually got up super early, because the sun rises at 5am and got in a session before breakfast. It’s a very fun right hand point break, similar to J-Bay, I’ve learned. I brought my 6’4’’ single fin, which was the perfect board, super fun!

The marine life there is stunning. One day we saw a whale mom and her calf out in the water. They are so big. I’ve never seen a whale before. They jumped out and we saw them a couple of days in a row. You also do think of sharks when you surf in South Africa, but I felt ok. It’s not the time of the year that’s infamous for shark attacks and you have to avoid surfing at dusk and dawn. Bianca’s boyfriend is a professional jet skier, so he was out there with us, just for general safety, since it’s so remote. We were surfing by ourselves most days.

Did you guys make any new plans when you left?

We want to go on another trip soon, maybe even to South Africa. We both have a busy schedule, so it’s always hard to find time. I might see Bianca in France in the near future.

Watch the full edit of Lena Stoffel and Bianca Buitendag surfing in the land of Xhosa:.