Thinking about pursuing flying again – Think twice: Flying causes a significant amount of CO₂ emissions. On a personal level each flight we board leaves us with a larger carbon footprint. What impact does our travel behavior have on the environment and what can we do to lower this impact and still see the world?

Air travel is responsible for a minimum of 2.5 percent of all annual greenhouse gas emissions globally. Depending on what CO2 and non-CO2 induced effects of commercial aviation you account for, it might even be up to 5 percent.

Flights produce mainly carbon dioxide from burning fossil fuel. While this already equals a large number of emissions right now, passenger numbers are predicted to double by 2037 and emissions to reach up to 15 percent by 2050.

Likely, you are doing quite a bit already to lower your personal greenhouse gas emissions: To reduce your carbon footprint you might be eating less or no meat. You might have updated your home’s isolation, switched to renewable energy. Maybe you even take your bike or public transport to get to work, you might even own a hybrid car.

But what about this long haul flight to {insert your favorite tropical surf destination here} you take every year? Or what about these two weekends in fall to catch a swell in Portugal?

If you are a carbon footprint savy human, like NASA atmospheric scientist and book author (“Being the Change”) Peter Kalmus, chances are the pie chart of your greenhouse gas emissions looks something like his: 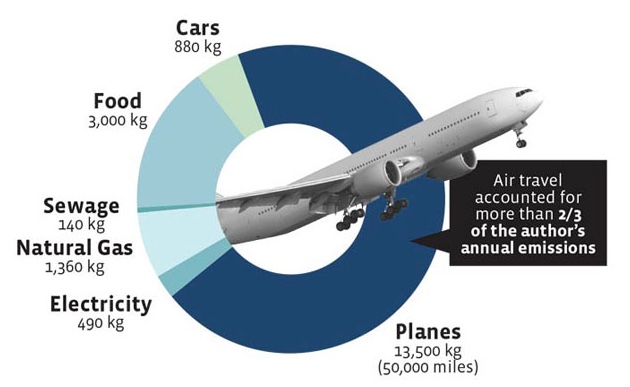 YES! Infographic: Peter Kalmus’ emissions in 2010 (19,000kg CO₂ equivalent) not including the small amount of new stuff he purchased and his shares in public infrastructure.

Most likely in your personal pie chart, air travel takes a little bit less room. But if you are a world nomad surfer or kiteboarder with a job that requires an occasional trip by plane, you are in for significant CO₂ emissions through commercial aviation. This can be anything from 4 to 30 percent of your total personal greenhouse gas emissions per year. An actually, that is not counting in any orders that get shipped right to your doorstep by plane (to open up an whole new topic…).

SWOX Athlete Valeska Schneider had her own point of no return when she flew to a sponsor meeting a couple of years ago. “I went to a meeting with a sponsor in Berlin. The company paid for my flight ticket so I flew from Munich to Berlin. With the time getting to the airport and a delay it took longer than if I had taken the train. Then I looked up how much CO₂ emission these flights equal and I was really shocked. Since then I decided to never fly within Germany anymore“ she says.

Today, approximately 20,000 airplanes are in service around the world. With the current trend continued about 50,000 planes are expected to take to the skies by 2040. The fuel efficiency will have to rise dramatically if emissions are to be reduced. Modern aircrafts are a lot more fuel-efficient than older models. Unfortunately, compared to “greener” cars, the developments in the aviator sector are limited in the nearer future. As a matter of fact there is nothing on the way with the transformative potential of an electric car.

While quitting flying all together is the very best option, many of us are not ready for this step just yet. But since there is absolutely no time to loose, you have to start today. Start where YOU can, and go from there!

How to reduce your Carbon footprint through air travel

On your next trip… ✈

Get a (used) lightweight luggage and pack only the things you need. The more a plane weighs, the more fuel it needs.

These non-CO₂ emission and their impact on global warming are proven but not fully understood yet.

During the day any contrails caused by the plane will reflect some sunlight away from the Earth instead of locking warmth into the atmosphere.

No matter if you’re vegan or vegetarian “on the ground”, it is a great starting point and usually the healthier option anyways. Besides, a light, sustainable meal during your flights also makes for less jetlag upon arrival.

Hey, and while you’re eating that vegan meal, how about enjoying water from your own water bottle, instead of another tiny plastic cup.

✈ lower or close your window shades

While doing so, the plane stays cooler on the inside and less fuel needs to be spend on cooling it down for passengers. If everybody would keep their windows closed the temperature on an average plane could be reduced by 10 degrees Celsius.

Atmosfair sheds light upon the carbon efficiency of the 200 largest airlines world wide. The independent research comes out with an airline index each year (2018 German and English version)

More people on less space, mean less CO₂ emission per person. To go a step further you could even choose a low-cost airline. By nature, their seating structure is making the most of aircraft space.

StayGrounded.org aims to exchange experiences, support each other, and campaign together for a reduction of aviation and its negative impacts.

Some of their main campaigns include the vote for the taxation of kerosene, a frequent flyer levy (FFL), setting actual limits on flights, temporary prohibitions of the construction of new airport infrastructure, fostering alternatives and institutional change of travel policies.

Become part of the movement!

Offsetting means supporting projects that prevent or remove the same amount of greenhouse gas emissions your flight causes somewhere else. Common examples are reforestation programs or renewable energy projects. The dangerous part about offsetting is that it can make you feel you’ve done enough too easily. This is especially true for frequent flyers. It is no solution to the climate crises what so ever.

That said, if you really have to take a flight and checked off all other boxes, it’s a last resort and a great occasion to support and get to know an environmental group.

Planes use the most fuel during takeoff and landing. If you avoid multi leg trips, your trip takes less fuel and causes less CO₂ emissions.

From a scientific standpoint anything less than 1,000 km (or about 600 miles) taking a car (with more than one person), a bus or a train is more efficient.

Do not take a lot of short trips. Instead take one long vacation and make the most of your flight.

✈ cut back on your air travel

You saw this one coming.

As much as you love your sport and traveling, it’s time to pull the switch. It’s 2021.

What about Alternative ways of traveling

Especially in Europe the railroad system is very well developed. Despite their delays and seemingly complicated bureaucracy, they are still faster and smoother on most short and mid distance trips. On top of that train rides are a convenient hop-on and hop-off alternative. Air travel always requires a trip to the airport, check-in, boarding etc. which ads to the door to door travel time.

Also think about the stuff you can get done on a train which you can’t do on an airplane: phone calls, e-mails, googling etc. – SWOX Athlete Valeska Schneider

Surfer and train traveler Valeska Schneider sums it up: “In the last month I went on about six train rides within Germany and every time it went really smooth. No delays or other major hassles. Usually the wifi was pretty good so I was able to get some work done or other productive stuff while travelling. I really enjoy travelling by train as it is also really relaxing and comfortable.“

As a rule of thumb the SWOX athlete says “If you are not sure if you should take the train or fly, always calculate the time you need extra to get to the airport, check-in and waiting for your luggage. Compare it to a train ride where you usually arrive right at a central station in the city. Also think about the stuff you can get done on a train which you can’t do on an airplane: phone calls, e-mails, googling etc.“